There are many benefits to being able to access almost anything from the touch of your phone. There is also a downside.

“This instant gratification in the financial world can be risky,” said Shelle Santana, a professor of business administration at Harvard Business School.

The reality is that more than 75% of all full-time workers are living paycheck to paycheck, according to a report from CareerBuilder.

While household income has grown over the past decade, it has failed to keep up with the increased cost of living over the same period.

From payday advances to layaway loans, there are new ways to access money to bridge the gap, easier and cheaper than ever before.

More from Invest in You:
Here’s how to invest like Warren Buffett
Tips from people who didn’t save till their 40s or 50s
You’ll probably regret that timeshare, car payment

But any incentive to loosen the purse strings is also a slippery slope, particularly as the pain from the last recession — now a decade behind us — subsides.

“The more that we are allowing consumers to have control over their finances and commit to healthy financial behaviors is a useful development,” Santana said.

However, “it could spur more spending than what consumers are capable of or what would be healthy for them to take on,” she added.

A growing number of companies, including Walmart, are giving advances by offering what’s now called “accelerated pay.” Through an app, workers have real-time access to earned wages ahead of payday. Like an ATM, there is a flat transaction fee but no interest charges.

To be sure, accelerated pay is not the same as a payday loan, which is generally considered the absolute worst way to borrow money in a pinch. Often offered through storefront payday lenders or even online, those short-term loans, generally for $500 or less, can come with an interest rate that easily runs into the triple digits — in addition to a “finance charge” or service fee.

As a perk, roughly 12% of companies include accelerated pay as another way of luring job candidates as wages remain relatively stagnant across the board, according to Michelle Armer, chief people officer at CareerBuilder, although that number is expected to grow.

At the same time, installment payments are shaking up how consumers finance purchases — on everything from sneakers to skin care.

Increasingly, merchants are teaming up with start-ups such as Afterpay and QuadPay, which let shoppers break their payment into installments without interest or fees — as long as they don’t miss a payment. Unlike the old form of layaway, you receive your purchase after your initial payment rather than once you have paid in full.

The idea is that shoppers, particularly millennials, will be drawn to the payment method, now called point-of-sale loans, and the retailers that provide it.

It’s similar to credit cards in that these companies charge the merchant, rather than the consumer, a processing fee. This phenomenon, however, is putting some pressure on purveyors of plastic, which have been reaping the benefits of a strong jobs market and low unemployment for years.

Meanwhile, the total number of credit cards in circulation continues to grow, which is up to more than 437 million, according to the most recent quarterly report by credit monitoring firm TransUnion.

Since the Great Recession, the number of Americans relying on credit cards has only increased.

Because originations are a key driver of growth for the industry, card issuers have been upping the ante with better rewards and sign-up bonuses to attract new customers. As a result, credit card originations were up 5.56% year over year, according to TransUnion’s latest data. 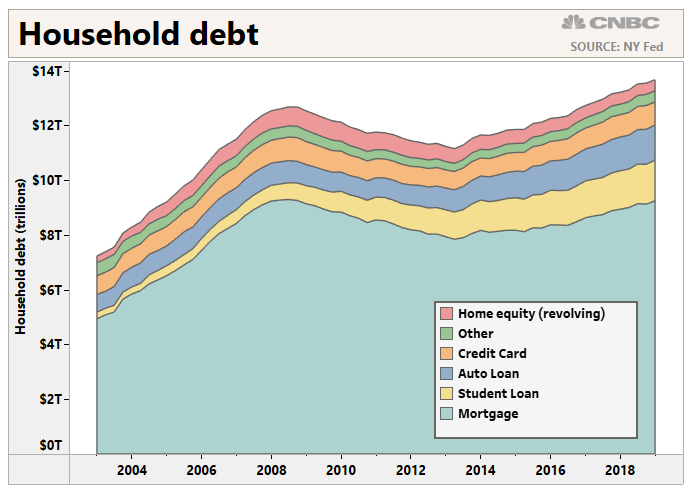 In addition to the rising number of card accounts, credit card balances are also steadily creeping higher among all risk tiers.

Outstanding balances reached a record $795.5 billion as the average debt per borrower grew to $5,645 in the second quarter of 2019, up 2% from last year, according to TransUnion.

Together, U.S. consumers added $35.6 billion in new credit card debt during the second quarter of 2019 — a near record, according to a separate study by personal finance site WalletHub.

“Our over-leveraging problem has been trending in the wrong direction for some time now, and the latest data indicate we’re truly entering dangerous territory,” said WalletHub CEO Odysseas Papadimitriou.