Looking for reasons to be optimistic about the U.S. economy? Try the aisles of Target.

Target’s stock soared more than 20% to a record $103 a share on Wednesday after the retailer reported a 17% jump in second-quarter profit, higher sales and a sunnier full-year outlook as its big investments in same-day delivery and in-store pickup services drew more customers.

The retailer and some of its big competitors like Walmart are standouts in what’s shaped up to be a lackluster earnings season for U.S. companies on the whole. The S&P 500, with more than 94% of its companies reporting the most-recent quarterly earnings, is on track for a ho-hum 1.2% increase in quarterly profits from a year earlier, according to data compiled by Refinitiv as of Wednesday afternoon. Sales at the 500 largest publicly traded U.S. companies rose by an average of 4.7% in the last quarter, the slowest growth rate since the third quarter of 2016.

The performance is unwelcome news at a time of stock market volatility and when forecasters are trimming economic growth outlooks, trade tensions are intensifying and driving up the cost of imported goods and economists are scratching their heads to figure out if we are headed for recession.

The U.S. economy expanded by 2.1% in the second quarter, the lowest rate since the first quarter of 2017 and down from 3.1% in the first three months of this year. Federal Reserve members expressed concerns last month about weak sectors of the economy like manufacturing. They said trade uncertainty amid the tit-for-tat trade battle with China, coupled with global growth worries, continues “to weigh on business confidence and firms’ capital expenditure plans,” according to minutes from the Fed’s July meeting.

At that meeting, the Federal Reserve cut interest rates for the first time in a decade, but the minutes released Wednesday said the move shouldn’t be viewed as a “pre-set course ” for future cuts, meaning companies may not be able to count on borrowing at lower rates.

But strong job growth, wages that are rising — if slowly — and robust consumer spending are fueling the economy and some pockets of strong earnings. 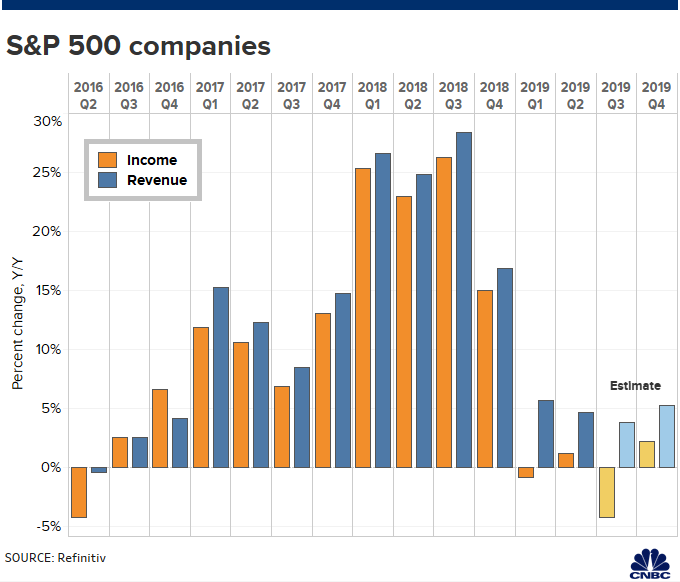 U.S. consumer spending, which drives the lion’s share of the economy, is growing but at a slower pace. In June, U.S. consumer spending increased 0.3%, down from the 0.5% monthly increase posted in May, the Commerce Department said late last month. But a slew of earnings reports from retailers shows that companies are still growing while their weaker competitors struggle as U.S. consumer shopping habits continue to shift.

U.S. airlines, for example, which make money from flying passengers and from selling frequent-flyer miles to banks that offer rewards to customers who spend with co-branded or other rewards credit cards, are on track for a 10th consecutive year of profitability. Executives at large carriers said on earnings calls last month that the strong U.S. economy helped them grow revenues.

Not all retailers are equal

But the spoils aren’t spread equally.

On the retail front, big-name stores like Target and Walmart, which invested in their companies to better take on Amazon, have posted strong results.

“There are clear winners and losers in the industry today … and the winners are companies like Target investing in stores,” Target CEO Brian Cornell said on a media call after reporting earnings Wednesday. He didn’t name companies specifically but said there are “share donors” aiding Target’s performance.

Stores that anchor U.S. malls like troubled J.C. Penney and Macy’s continue to struggle as fewer consumers seek out such big shopping complexes to buy clothing, accessories and other goods. Instead, one-stop shopping destinations like Target and Walmart are appealing to more consumers with their revamped in-house brands, broad selection of national labels, speedy delivery options and real estate spread across the U.S., putting them closer to customers’ homes.

J.C. Penney’s stock last month fell below $1, putting it at risk of being delisted by the New York Stock Exchange.

Even executives at companies that are doing well are cautious. Home-improvement giant Home Depot beat earnings estimates this week but trimmed its outlook because of the potential impact of tariffs on its business.

There are weaker patches in the economy though.

Lower fuel prices hurt energy company performance in the last quarter, while global trade tensions, weaker growth and tariffs weigh on the materials and the industrial sectors. Boeing’s 737 Max crisis stemming from two fatal crashes prompted the company to post its biggest loss ever in the second quarter. It has also slowed production and halted deliveries, impacting several suppliersincluding already-struggling General Electric, which makes engines for the beleaguered jets with its French joint-venture partner Safran.

“I think it’s always better when the economy is firing on all four cylinders,” said Kate Warne, chief strategist at Edward Jones, who noted that companies in general “have had more headwinds this year.”

However, profit growth appears weak in comparison with last year, when large corporations reported a surge in profits after the big corporate tax cut, she said.

As profits have recovered in the 10 years since the U.S. emerged from recession, workers are demanding better pay and benefits, forcing some companies to pay higher wages, just as companies are trying to grow their bottom lines more.

“The level of earnings is spectacular but it’s very difficult for companies to grow earnings from here,” said J.P. Morgan’s Kelly. “When you go to very high levels of profits, the workers all know, and the demands of ‘pay me more or I quit,’ tend to grow.”

The thing to keep an eye on is business confidence, even more than consumer confidence, because that will dictate future employment levels, he added.