With online shopping gaining ground year after year, Cyber Monday has surpassed Black Friday as the preferred day for deals around the holiday season for all age groups, according to a new study.

Deloitte’s study said 53% of people will rely on Cyber Monday for discounts, while just 44% say they’re planning to snag promotions on Black Friday this year.

Within that, Gen Z shoppers are the most reliant on the online shopping holiday, with 65% saying they’ll use Cyber Monday for deals, followed by 61% of millennials, 49% of Gen X consumers, 47% of baby boomers and 44% of seniors.

Comparatively and across the board, Black Friday is a smaller draw, exciting 58% of Gen Z consumers, 54% of millennials, 39% of Gen X shoppers, 37% of baby boomers and 34% of seniors. The consulting firm collected the data for its annual holiday study by polling 4,410 consumers online from Sept. 6 to 13.

“We’ve seen that [trend] grow for the past five years,” Rod Sides, vice chairman of Deloitte’s retail and distribution practice in the U.S., told CNBC. He also noted 70% of smartphone users say they’ll use their phones to buy something this holiday season, which contributes to the Cyber Monday bump.

In recent years, shoppers haven’t been as jazzed about lining up outside the mall, a Walmart or Best Buy store after a generous helping of turkey, mashed potatoes and pumpkin pie. Why bother, when retailers will offer similarly steep discounts just days later, and you can purchase everything from the comfort of your sofa?

Amazon’s Prime Day deal extravaganza in July has also contributed to the holiday shopping season starting even earlier and drawing dollars away from days steeped in tradition, like Black Friday. 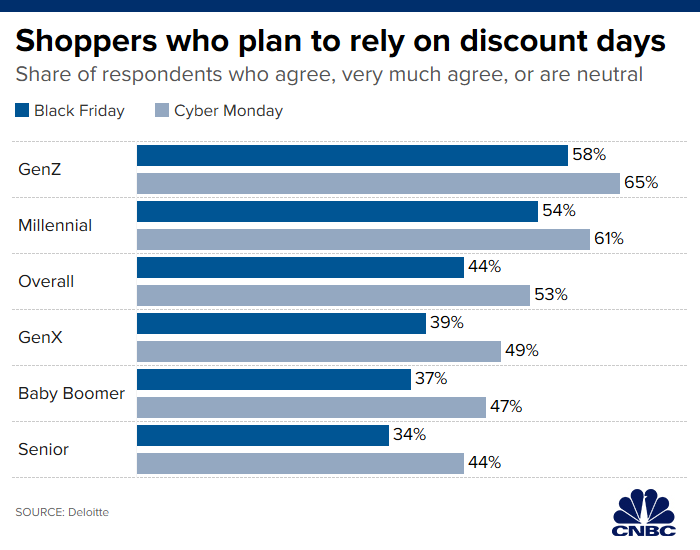 Deloitte in September said it was expecting 2019 holiday retail sales to increase 4.5% to 5%, exceeding $1.1 trillion. That would be better than the Census Bureau data of sales growth of 3.1% on sales of $1.09 trillion from last November to January.

Deloitte also has forecast retailers’ digital sales to be robust, amounting to $144 billion to $149 billion. E-commerce sales are expected to grow 14% to 18%, according to the firm, which would be better than growth of 11.2% in 2018.

In its follow-up study released on Tuesday, Deloitte said shoppers are expected to spend $1,496 per household this holiday season, with the bulk of spending, or $596, going toward experiences like travel and dining out. That’s slightly down from an average of $1,536, with $611 going toward experiences, in 2018. It said the top 20% of spenders will account for 60% of the total dollars spent this holiday season.

Deloitte found people overall are expecting to spend 59% of their 2019 holiday budgets online, versus 36% in bricks-and-mortar stores.

The study also found that shoppers aren’t planning to use some of the fancy delivery services that companies have been touting and investing in. Simplicity seems to be win, with 62% saying they expect to use a standard delivery option, followed by 36% anticipating selecting next-day delivery and 34% planning to buy something online and pick it up in a store. Just 17% expect to need same-day delivery, 11% plan to use curbside pickup and 8% think they’ll have something ordered and stowed in a locker.

“Maybe it’s because [some of these options] are new and consumers don’t think about them yet,” Sides said. “But the level of adoption remains low.”