Makers of luxury goods from liquor to perfume think they have found the antidote to the fading American shopping mall: airport terminals.

The world’s airports, drawing ever more travelers with time to kill, have become havens of high-end shopping, where stores sell $400 bottles of whiskey and $4,000 purses against the backdrop of day spas, hot springs and, in one case, a butterfly garden.

For the first time last year, Estée Lauder Co. generated more revenue at airports globally than at U.S. department stores, which for decades had been beauty companies’ biggest sales driver. Other luxury-goods companies, from spirits maker Bacardi Ltd. to Kering SA’sKER -0.53% Gucci, are also expanding their presence at airport terminals.

“Very few channels have almost guaranteed traffic,” said Olivier Bottrie, who heads Estée Lauder’s global travel-retail business. “When a department store goes away, it’s not a major catastrophe. But if a major airport went away, it would be a major catastrophe.”

An average person travels by plane three to four times a year, and spends about 72 minutes waiting between security and flight—the so-called golden hour—according to Bacardi. Travelers, especially those coming from Asia, increasingly work high-end shopping sprees into their trips, planning layovers around access to lavish shopping, executives say.

Global sales of duty-free and other travel-retail channels rose about 9.3% to reach a record $76 billion in 2018, up from $69 billion in 2017, according to research firm the Data Circle. Travel retail consists of airport shops, in-flight purchases, duty-free stores neighboring airports, cruises and online orders picked up at the airport. All stores located beyond airport customs are duty-free.

Especially attractive is the influx of travelers with disposable income from emerging markets such as China, India, Russia and Brazil, where the fast-expanding middle class means untapped potential. 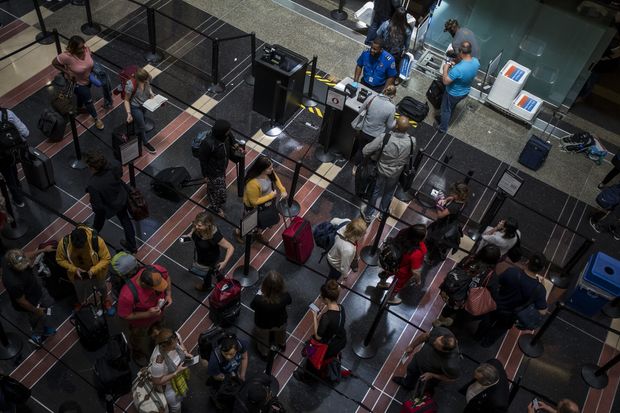 Airport shoppers are attractive to luxury brands because they tend to have time to burn and therefore linger longer in stores. PHOTO: ZACH GIBSON/GETTY IMAGES

In China, for instance, only 9% of people have a passport; every day an estimated 7,000 Chinese travelers take their first international flight, said Vinay Golikeri, managing director of global travel retail at Bacardi.

Estée Lauder is among the biggest beneficiaries of a growing appetite for high-end shopping at the world’s airports.

For luxury brands, airport shops offer direct access to shoppers who are less familiar with high-end names but are eager to purchase products they can’t find near home.

“It’s not about discounting now; it’s really about experience,” said Edgar Huber, who headsCoty Inc.’s luxury division. The company’s drugstore brands such as CoverGirl and Clairol have been struggling for years with declining sales, while its luxury unit continues to grow, fueled in part by travel retail. Last month, the company rolled out a line of Gucci lipsticks at airports including a tube called Goldie Red that sells online for $38. 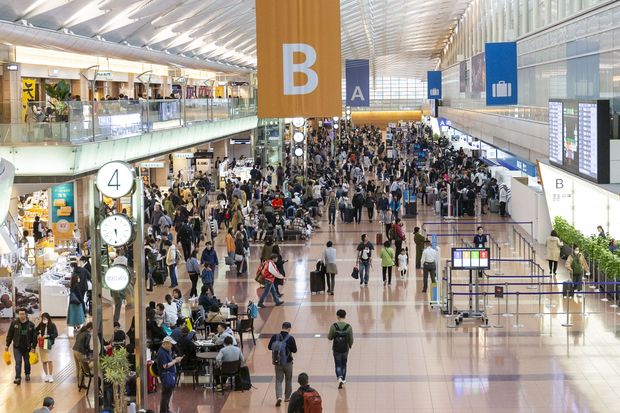 Mr. Huber said roughly 15% of travelers buy at travel-retail outlets, leaving room for growth. And, he said, airport shoppers are attractive because they tend to have time to burn and therefore linger longer in stores.

Mieko Tsukimori, 68, and her husband arrived at Haneda International Airport in Tokyo last month three hours before their flight to Hong Kong, which allowed them to browse through stores for Japanese souvenirs. Lined with red-lacquer columns, Haneda offers a theme-park version of Edo-era Tokyo, complete with a replica of the famous all-wood Nihonbashi bridge. “We come here early and have some tea and anmitsu,” Mrs. Tsukimori said, referring to a Japanese confectionery with sweet-bean paste.

Do you shop at the airport while waiting for a flight? Why or why not? Join the conversation below.

“Over half of the people, when they travel and browse stores, they’re looking for something they can’t find back home,” said Bacardi’s Mr. Golikeri.

In May, Bacardi rolled out a three-part series for its Aultmore Scotch whisky at Heathrow Airport in London, selling each bottle for $400. The company found that most shoppers were buying all three bottles totaling $1,200.

—Mayumi Negishi contributed to this article.