China is the biggest driver of the outsized revenue that the beauty industry has seen in the past few years, according to a new report by J.P. Morgan.

The country has quickly gained on the United States in beauty sales and is set to overtake it by 2023, even if growth slows. In 2018, beauty sales in China grew 12.9%, compared with just 4.6% in the States. And prestige cosmetics companies such as L’Oreal, Estee Lauder and Shiseido are reaping the benefits. As of June, Estee Lauder grew more than 40% in China over the past year, on top of the 67% growth seen in the previous 12 months, according to the report.

“What makes these companies so attractive is that they’ve been investing a lot more in digital over the past few years,” said J.P. Morgan senior equity research analyst Andrea Teixeira. Many Chinese customers outside of the most developed cities tend receive products through e-commerce sites such as Alibaba, which has been developing more quickly than department stores. 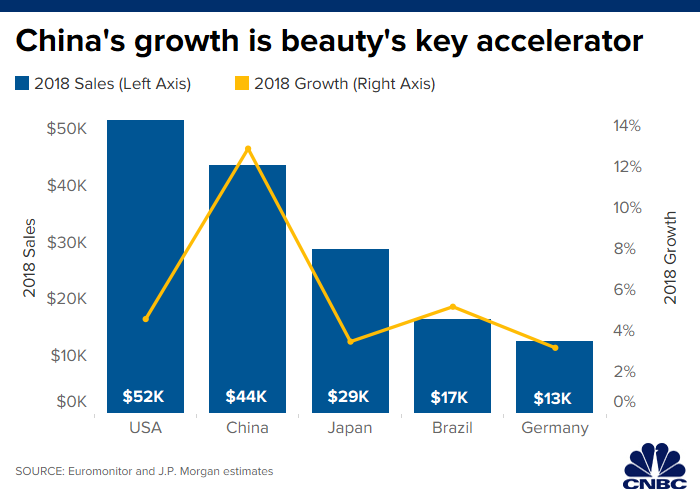 “There’s also the fact that they have an aspiration aspect or quality, which makes it more attractive,” said Teixeira. Prestige cosmetics are considered luxury products, and being able to purchase them can be a sign of class or status.

China’s growing middle class or young customers with increased spending power, subsidized by their parents and grandparents, are also new shoppers fueling the growth, according to the report. 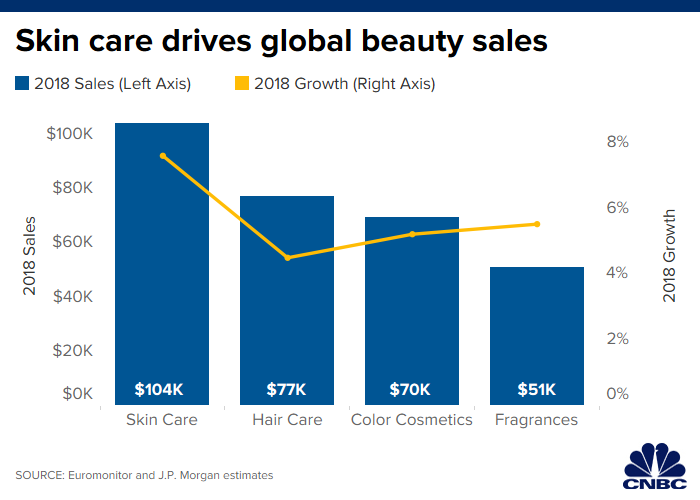 Teixeria said China has historically been dominant in the skin-care market. “Chinese women tend to engage earlier than most [in skin care.] They realize that they have to prepare the skin as a canvas ... that’s the difference between the West and East on that aspect,” she said.

Globally, skin care grew 7.6% in 2018, compared with a 5.2% increase in color cosmetics and 5.5% in fragrance, as consumers in the U.S. also begin to realize the importance of skin care. In its most recent earnings call, Ulta Beauty said skin care was one of its strongest growth categories for the quarter, delivering double-digit comparable sales.