A new set of tariffs on China that particularly targets retailers has Wall Street deciding which companies will be able to clear the bar, and which will stumble when the new levies go into effect.

Shares of retailers tanked on Thursday when President Donald Trump surprised investors by ending a tariff ceasefire with China. Trump tweeted that the U.S. would be levy tariffs of 10% on the remaining $300 billion in Chinese imports, starting on September 1.

The consensus on Wall Street is that Department stores are the most at risk in the new tariff environment.

“Department store P/E valuations look low today, but the market may be underestimating how negatively impacted their earnings might be from tariffs,” said Sole.

Macy’s, Nordstrom and Kohl’s may suffer blows to their profitability, Goldman Sachs, Credit Suisse, Jefferies and UBS told their clients. 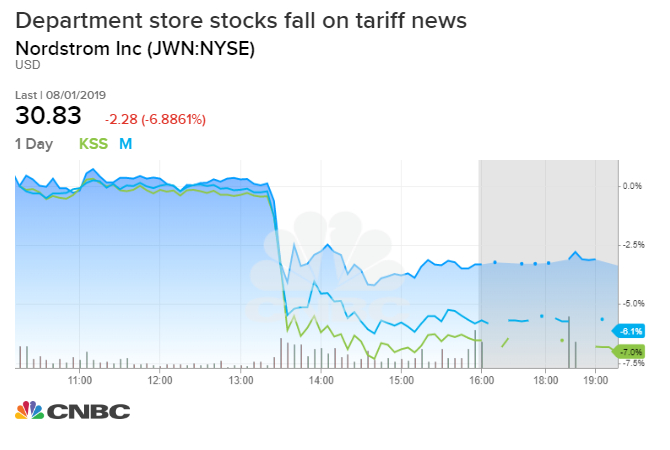 “We clearly see the d-stores as most poorly positioned to compete, with already low EBIT margins + evidence mounting this week that US demand is already decelerating,” said Credit Suisse retail analyst Michael Binetti.

Jefferies said working with vendors will be key for those with sizable China exposure. 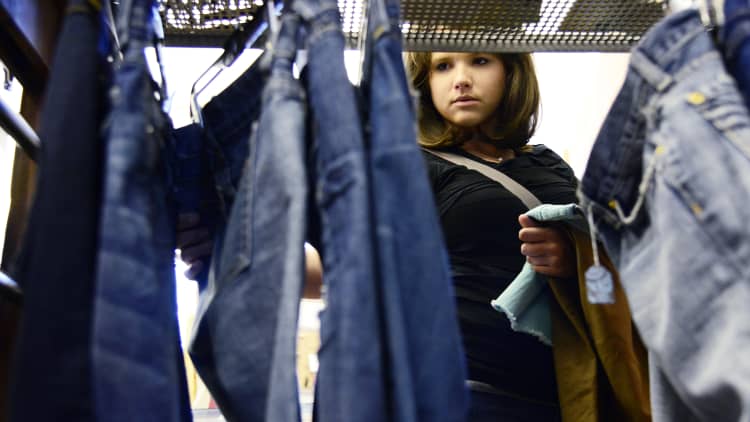 WATCH NOW
VIDEO03:39
Here’s why it’s so difficult for apparel companies to navigate the trade wars

“We don’t believe the tariff announcement is a “buy-the-news” event,” said UBS analysts Jay Sole. Sole said the possible increase to 25% weighs on stocks, not to mention the market’s fear about how China might retaliate.

Yeti, Gap, and L Brands are also at risk, according to Goldman Sachs. Shares of Yeti were down more than 3% on Friday.

Regarding dollar stores, Big Lots, Dollar Tree and Five Below are the most at risk.

Nike, the world’s largest shoemaker, has a sizable 23% exposure to China. Surprisingly, the consensus on Wall Street is that the athletic apparel giant won’t suffer from the new tariffs.

Piper Jaffray said Nike has a diversified global footprint and Bank of America said “we see the brand as having strong pricing power.”

UBS told clients that Nike, Lululemon and V.F. Corp. are best positioned to outperform with the new tariffs, while Goldman said Dollar General and Ollie’s Bargain Outlet are less exposed in terms of discount retailers.

The largest exposure is in the Toy sector is Hasbro and Mattel followed by camping retailer Camping World Holdings, said Wells Fargo.

Jefferies said Mattel is specifically in danger because it vertically manufactures in China.