A visit to an upscale suburban mall or a city shopping district used to be marked by stops at Gap, Sharper Image and Barnes & Noble, ending in a pile of shopping bags.

Now it’s about taking a $36 Pilates class, maybe followed by a $36 indoor cycling session if you’re really committed, then hitting the organic market to slam a $10 coconut water before making a quick stop for $40 cryotherapy.

That’s what I did earlier this month at Rye Ridge shopping center,an outdoor mall in Rye Brook, N.Y., which houses, among the typical Starbucks, drugstores, delis and clothing stores, a profusion of boutique fitness and wellness-based retail enterprises almost as concentrated as the electrolyte level in the coconut water (which, honestly, I skipped). It is reflective of boutique “fitness clusters” around the country that have emerged in suburban shopping developments and gentrifying city neighborhoods. These new storefronts are rendering the old concept of “mall walking”absolutely antiquated, if a comparative bargain.

Had I timed my day right and perhaps taken a few uppers, I could have also done hot yoga ($28), taken a high intensity interval treadmill class ($34) and sat in a detoxifying sauna for 30 minutes ($30).

As brick-and-mortar retail stores have taken a beating from the internet, yoga, Pilates, rowing, boxing, cycling, barre and H.I.I.T. studios are entering the spaces formerly inhabited by apparel, books and electronics stores: catering to a consumer class seemingly more interested in investing in the shape of their bodies than the clothes that cover them.

Taking a group fitness class, it turns out, is one of the few things you can’t order from Amazon. These studios now make up a big part of what’s been called the “experiential economy,” after the “experience economy,” a phrase first coined in Harvard Business Review by B. Joseph Pine II and James H. Gilmore 21 years ago, but amplified to the max by the more recent advent of Instagram selfies.

I visited the mall in the suburbs at the suggestion of Amanda Freeman, the founder and C.E.O. of the Pilates-inspired SLT (“Strengthen Lengthen Tone”) fitness company. I went to SLT classes when she opened her first studio, in midtown Manhattan, eight years ago. The company now has 24 locations in New York, New Jersey, Pennsylvania, Connecticut and Michigan.

Ms. Freeman told me that when opening a new studio, she sometimes looks for real estate near other boutique fitness studios. A customer who passes by SLT on the way to another such exercise class is already used to paying $35 or $40 a pop. And there is the potential for the “restaurant effect,” which is when a row of eateries becomes a dining destination for customers who may want Italian one night and Thai another.

“If I’m opening a new location, I want to open where a comparably priced studio is already thriving by offering a different workout,” Ms. Freeman said. “What I don’t want is to open near a $20-a-class yoga studio where people are going to ask, ‘Why is your studio $40?’” 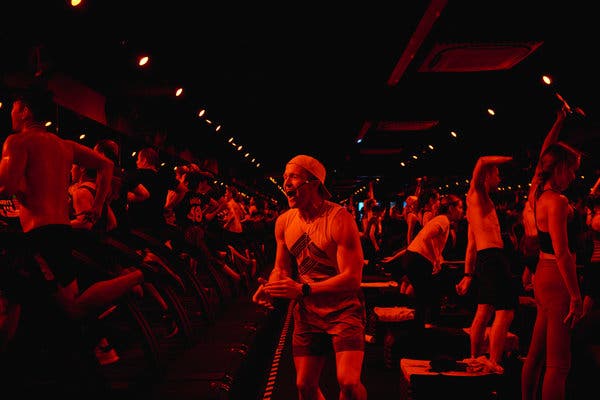 Five years ago, Ms. Freeman jumped at the chance to open on the fourth floor of a building on Third Avenue and 67th Street in Manhattan. FlyBarre, which offers an “ultimate total body burn” floor workout for $36, is on the second floor. Flywheel, the indoor cycling studio which sells single sessions for $36, is on the third. And Fhitting Room, a $38-a-class high-intensity training studio, is on the fifth. “Co-location creates a fitness community,” she said. “Plus you can play the music as loud as you want and no one cares.”

There is an art and a science in determining locations for boutique fitness expansion, said Joey Gonzalez, the C.E.O. of Barry’s Bootcamp, a full-body treadmill-and-weights workout studio with 58 locations in nine countries including Australia, United Arab Emirates and Norway. (Depending on the location, classes cost between $30 and $36.) The process starts with listening to existing and future customers who post to social media and email with requests for a Barry’s in their neighborhood.

For international locations, they home in on cities that have already found locals and expatriates who are embracing boutique fitness. Then Mr. Gonzalez will find a partner in that city and let them guide the search for the right spot. This is how Barry’s ended up in Raffles Place in Singapore. It will open in the shmancy Golden Triangle neighborhood of Paris this month.

When scouting for new spots to open in the U.S., Mr. Gonzalez relies on demographic data from Esri, a location analytics company.

Looking at household income, education and age, Esri’s softwarehelps Barry’s find the demographic groups that comprise its customer base, with names like “Urban Trend-Setters” and “Laptops and Lattes,” he said.

Barry’s will open soon in Charlotte, N.C., Philadelphia and Houston.

Fitness clusters in urban settings pop up organically, because no one landlord owns all the property, said Jeff Weinhaus, president and chief development officer for Equinox, the luxury fitness club brand. In suburban shopping developments which usually have a single owner or management company, the mix of fitness and wellness studios need to be “carefully curated,” he said, or “they seem contrived.”

Equinox, where all-access memberships start at $260 per month, has 99 locations in the United States, Canada and the United Kingdom. The 100th location will open later this month in Hudson Yards, the new upscale retail and residential district on New York’s West Side, developed in part by the real estate behemoth the Related Companies, the principals of which own majority stakes in Equinox and SoulCycle.

Mr. Weinhaus is skeptical about the benefit to individual studios of grouping exercise studios and gyms in one location, because it is important to differentiate the quality of your brand from others. But he feels differently when it is his company in control of a cluster. On the Upper West Side of Manhattan, below a Related Co. apartment building, there is on one block an Equinox, an always-packed SoulCycle and, directly around the corner, a 20,000-square-foot Pure Yoga studio, which is also owned by Equinox. Though Equinox offers both yoga and indoor cycling, gyms and boutique studios “are not competing for the same users,” Mr. Weinhaus said.

In fact, the membership club can become a valuable incubator of new studio concepts, he said. It piloted a Precision Run studio at an Equinox in Chestnut Hill, Mass., offering a 50-minute treadmill workout based off one of the fitness club’s most popular classes. Now the company has opened its first stand-alone Precision Run studio, on 21st Street in Manhattan, in the growing fitness hub of the Flatiron district: an area long known as the Ladies Mile when it contained department stores like B. Altman and Best. A second Precision Run studio will open in Los Angeles. 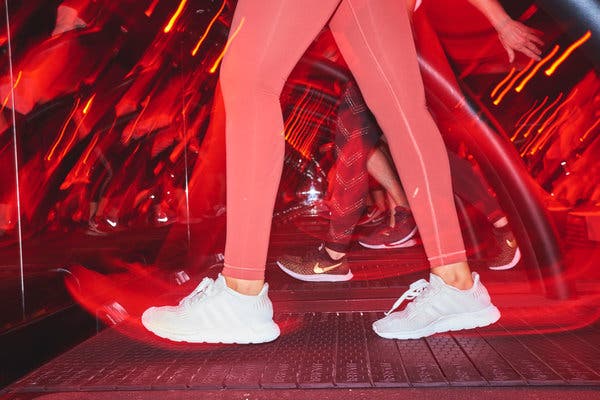 Landlords are game for these fitness tenants, said John Klein, a one-time real estate executive for Equinox who now runs a consultancy focused on wellness, retail and apparel industry (and trendy businesses like the Wing). “Boutique fitness is a lifestyle habit for millennials who like self-care and have a solid disposable income,” he said. It attracts foot traffic from people wearing expensive shoes.

But wait. Weren’t companies like Peloton ($2,245 bike, $39-per-month subscription, $125 shoes; recently filed for an I.P.O.) and the Mirror ($1,500 looking glass, $39 per month subscription; advertised in subways and on Facebook) supposed to revolutionize the way we worked out?