The holiday season is less and less important for retailers, as more shopping moves online, according to a new study.

Coresight Research said Tuesday it’s calling for a 4% increase in U.S. retail sales this November and December, which isn’t as robust as some estimates already out there. For comparison, Coresight said total retail sales over the past three months climbed 4.1%, from the same three-month period a year ago.

The firm called out “the ongoing trend of holiday shopping becoming less important to key retailers.” It said the holiday season accounted for almost 24% of all retailers’ sales in the late 1990s, but is closer to 21% today. And Coresight is expecting that percentage to continue to shrink. 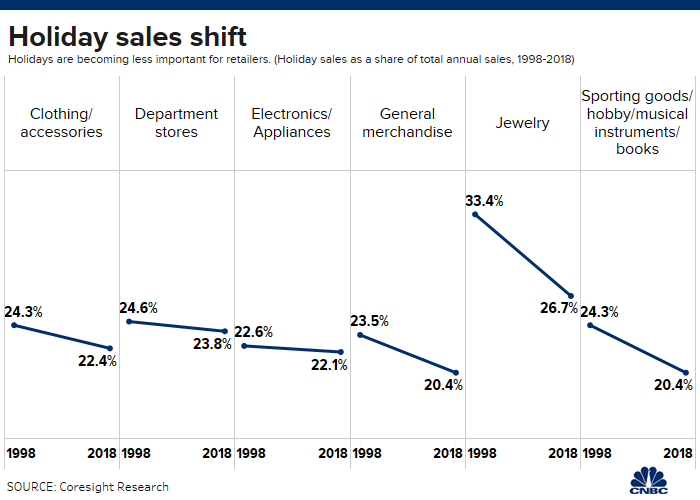 Holiday sales have dropped the most over the years, as a percent of annual sales, for jewelry chains, the study found. That’s followed by sporting goods stores and then general merchandise stores.

The ease of online shopping throughout the year, with constant deal days, has accelerated this trend. Amazon’s Prime Day in July, for example, has led to more retailers like Target, Walmart and Kohl’s offering steep discounts on toys, apparel and electronics during the summer, in a bid to stay competitive. That pulls shoppers’ dollars forward and away from November and December.

Coresight is calling for a little more than 23% of all non-food retail sales to take place online this holiday season, up 200 basis points from in 2018.

The one issue retailers should we wary of — if this trend tracked by Coresight holds true — is ending up with too much inventory on their hands after the holiday season, if they’re planning to sell more than what ends up being the case. That could force companies to use heavy markdowns in January to clear the shelves. This would weigh on profit margins at the start of the New Year.

A late Thanksgiving this year, falling on Nov. 28, means there are six fewer days between Thanksgiving and Christmas than in 2018. In fact, 2019 is the shortest possible holiday calendar scenario, Coresight noted in Tuesday’s report.